ISSUE 3. Everything you didn't learn in school by Viviano Villarreal-Buerón

EVERYTHING YOU DIDN'T LEARN IN SCHOOL

Visualizing the status and goals of teaching Architecture in Mexico

Catchy title? Very often, I have repeated this adage that compares Architecture to Medicine, as they both are professions where one never stops studying and learning. This related to the constant emergence of new ways of inhabiting, technologies, social dynamics among other topics that push the current, important, and necessary advancement of the profession. Faced with this proclamation of a culture of infinite studying. How can we come to agree on a finite curriculum?

THE LEGACY OF THE PARADOX

This paradox of What and How? you must learn one to become an architect is not new. Its origin can be traced at the end of the Middle Ages in the Renaissance in Florence. At that time, it was decided to take the architect out of the guilds of medieval artisans and unite his work with the arts and philosophy. This union develops the first academic pedagogical model, in which the definition of Architect and Architecture moves something given to a philosophical debate. (So much so that to date it is difficult to define whether it is part of Humanity or Engineering). After the renaissance, the academic model flourished, grew and evolved with the various royal academies under the command of kings in France and England until reaching the creation of private institutions in the United States.(i) So we have managed to bring together an important history of academic architecture of almost 600 years. A certainly remarkable figure if it were not for the previous 4,000 years of (ii)  educated architects so we can call the model atelier.(iii)

In 2015, Mexico had 376 institutions (public/ private) accredited to issue bachelor's degrees in Architecture. (iv)  The state of Puebla being the entity with the largest number of institutions (34). The states of Mexico, Jalisco, Puebla, and Mexico City together represent the third of the country's total offer. In the state of Nuevo León of the 17 institutions named, while writing this article, 7 of them have ceased to offer the program and / or have closed its doors. (v) This list represents 376 institutions that postulate to have resolved the paradox proposed by this article. Therefore, it is important to understand the different perspectives and philosophies of each of these curriculum proposals. Where is it described What and How? It is taught in architecture academies.
Most of the academic offer in Mexico is divided between public and private universities of different sizes that offer architecture as one of its departments, schools, or colleges. Together with these universities there is a small and fledgling group of institutes specialized only in design-related disciplines without offering other type of departments. Performing a comparative exercise of the mission and description of 7 academic programs, we find that the most of them used terms: Construction, Design, Art, Culture, Human, Urbanism and Sustainable to describe their programs Meanwhile Technology is only mentioned in half of the programs and Innovation is only mentioned by 2 of them. 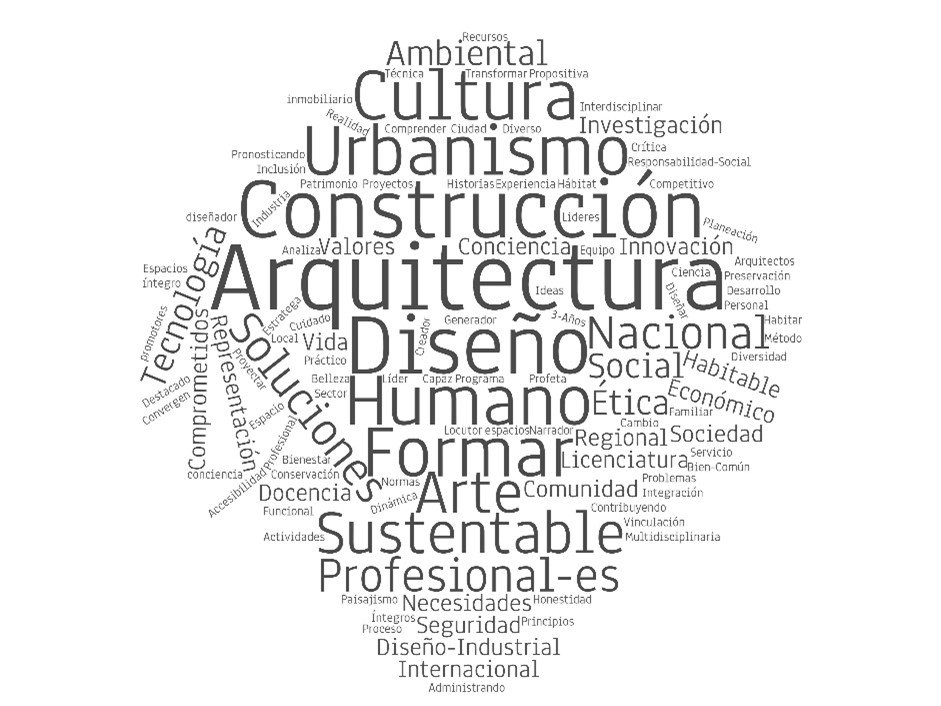 With this exercise it is not intended to suggest that we should assess institutions only through their descriptions of academic missions, which often must be condensed and modified by several committees. However, these do not cease to be paramount in understanding the direction that architecture pedagogy takes in Mexico. Certainly, the value of an institution goes beyond the specific details of its academic program, such as its facilities, infrastructure, history, and faculty.

There are physical and tangible values that institutions provide such as their facilities (libraries and workspaces), history (experience and academic achievements) and above all their human assets (faculty and administration). The latter being key in understanding that what an academic institution offers is not only the transfer of knowledge but also the opportunity of networks based on personal connections between colleagues, students, and professors. That aspect that the English language describes with the word "networking". Perhaps here we have a glimpse of the real question: What do these 376 programs tells us about the future of the profession in Mexico? What are these 376 institutions looking to achieve with future generations of Architects? What we find is a great diversity of programs, described in a hegemonically ambiguous way. With phrases like "Training Professionals in the Field of Architecture".

These ambiguous phrases not only illustrate the large and different ranges to which a person with an architecture degree can perform (from journalism, to museography) these programs primarily seek to avoid defining defining the nature of the program. Perhaps because of the difficulties already exposed, perhaps because of real market issues. The next relevant question here is: Who is in charge of shredding, understanding and evaluating these programs?

FROM THE BELLY OF THE BEAST

From my trenches I can only alert to what I see. In Mexico I perceive a pedagogical field where different institutions of different scales explore a model which could be described as "specialization". It could be understood sometimes that it is the university model seeking to encompass the critical mission of these small and fledgling specialized institutes aforementioned. Furthermore, regardless of university or institute this movement towards specialization presents different ramifications.

In the case of one of these institutes that seeks to focus on what is called the "creative", it impacts the program by eliminating all history courses for example. Another pedagogical instance seeks to include a specialization within the bachelor's degree, which beyond the pedagogical experiment, it may open doors to a discussion about the value of graduate studies. Finally, in a last pedagogical exploration of specialization, we have a model that cuts the curriculum to 3 years to face a more tangible reality of our regional context with a strong interest in the practice and construction.

The length and width of responses to this paradox of how to define an Architecture curriculum? It's  testament  to its  complexity. And while all these answers, explorations and we could even say speculations are welcome in the academic field, this variety becomes completely incomprehensible to someone not versed on the subject, as it is the case of the most important character in this story, the -future student. It is for this reason that I emphasize the importance of the mission of our programs.

In a profession that is difficult to define and with such a variety of programs, the definition and differentiation between them is paramount. It is certainly not only the responsibility of the different institutions for the correct and sincere formulation of these descriptions and missions, but also due to the time future students must devote to them to research, dissemination and understanding.

Everything you didn't learn at school?  This phrase is attractive because there is no way you could have learned everything that is necessary for the field of the profession with a bachelor’s degree and our pedagogical programs should embrace and adopt this position, given the fact that not doing so goes against our own nature as a discipline. Graduating with a bachelor's degree is not the culmination of architecture studies but the introduction to architecture life. This phrase will be attractive only to those who feel a lack of satisfaction with the quality of education they received. I propose that this shortfall in satisfaction may have more to do with a misunderstood program more so than the program itself.

Defining and understanding our programs has a present and future. In doing so we welcome the new generations and thus visualize the future that we want to achieve for them. Only having clear vision of the variety of existing programs by means of their quantification and understanding of their ideological position ranging from bachelor's degrees of 6 to 9 semesters, with specialized approaches in the artistic/compositional, to the practical and constructive. In contrast to the unclear and all-encompassing programs. Only then can future students make accurate decisions.

From my perspective, students and practitioners must take more seriously the formulation of our curriculum programs and their descriptions. These must transcend market influences as well as administrative comfort. We must further promote the connecting activities both prior to the beginning of studies with approaches to classes and architectural subjects during high school (some universities are already doing) as well as through studies with the architecture guild as well as different public and private associations (Academies and Institutes of Architects). If we focus on these areas of opportunity, we will not only improve the students’ perspective but the guild in several ways and degrees, to make sure that the starting phrase of this article is never considered again.

[i] Massachussets High School under William Robert Ware is recognized as the first professional curricular architecture program of 4 years.

[ii] Imhotep in ancient Egypt is recognized as the first architect to have official appointments. Having reigned in Memphis from 2630-2611 BC. 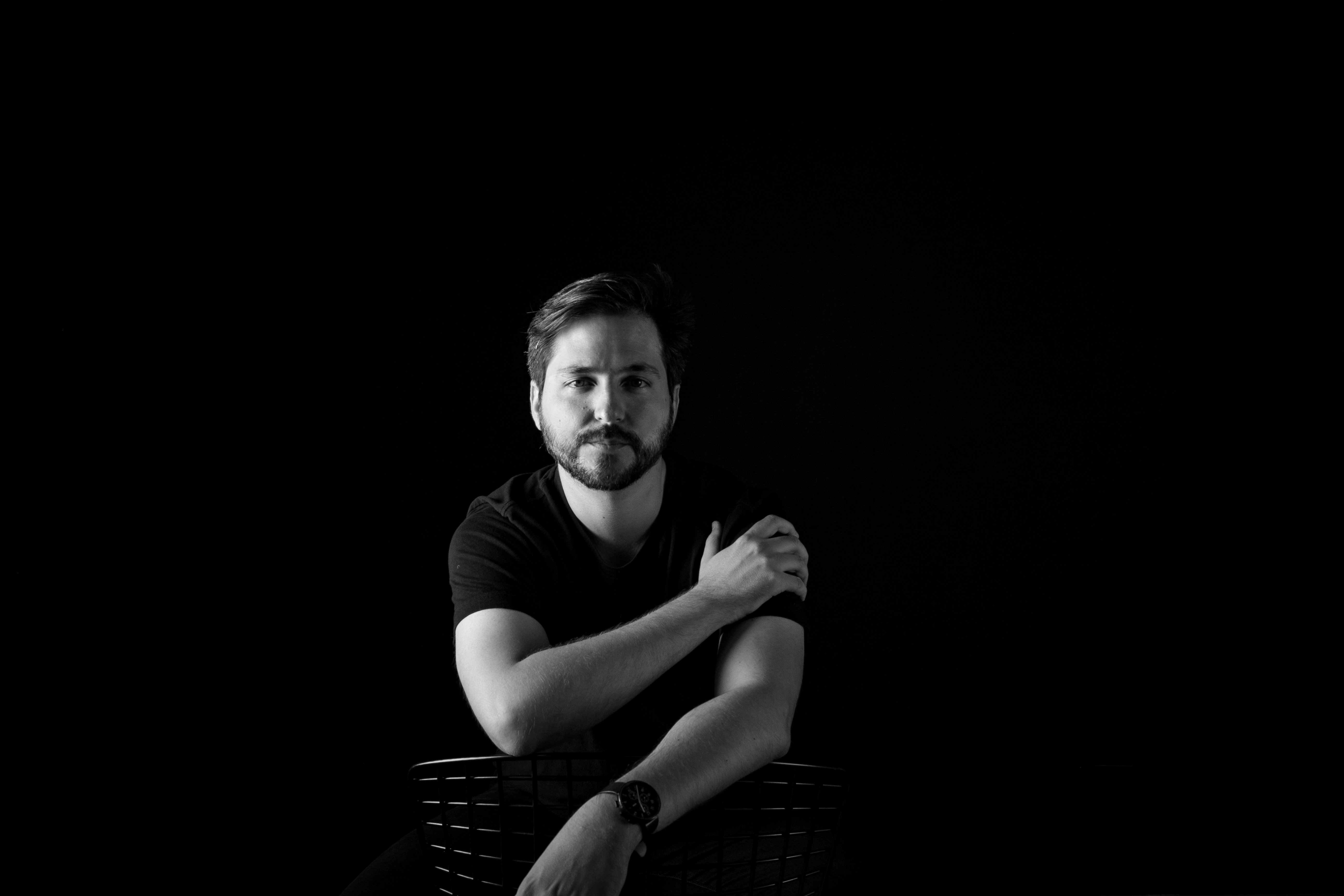 Viviano Villarreal-Buerón holds a bachelor of architecture from Tec de Monterrey in Mexico, with a Masters in Design Theory and Pedagogy from SCI-Arc in los Angeles, where he graduated with distinction and his thesis was awarded the Best Post-Graduate Thesis award for 2019. From 2009-2015 and prior to establishing his own firm Viviano worked for the Pritzker Prize Dutch firm OMA (office for metropolitan architecture) led by architect Rem Koolhaas, from their Hong Kong branch office.

With offices in México and Hong Kong, in 2015 Viviano establishes MASS OPERATIONS, a design studio which understands architecture as a series of operations which when applied to matter generate space. The office’s recent projects include the Headquarter Offices for the Mexican Pharmaceutical company Farmacias del Ahorro in Monterrey Mexico, the Barcode Tulum building, The Stair House and the Chai Wan Artist Loft in Hong Kong.

In addition, Viviano is also in academia, having taught at Hong Kong University and USJ of Macau in Asia. Presently he is adjunct professor of architecture at the Universidad de Monterrey (UDEM) and leads the Vertical Studio of “Cátedra MASS” at the Universidad Autónoma de Nuevo León (UANL). Viviano is a Chapter member of the National Architecture Academy of Mexico as well as the Architects Institute of the State of Nuevo León, where he has published several articles on architecture and its pedagogy.