Issue 7 Culture and Performance in Public Spaces by Nancy Castro

Public space, as a formal and physical element linked to the city, is strengthened to the extent that guarantees accessibility, that is, its social configuration, as well as its architectural and natural elements, provide legibility to the urban order inscribed in the space, which facilitates its appropriation and proper use according to the established rules.

If the public space is a representation of us and the intrinsic relationship with it, favors or not our lives, we are essentially social agents from all the relationships that we forge within an established spatial limit, we inhabit the inferred spaces, we talk about them and to a large extent those spaces have our personality, a back-and-forth relationship, finally, we deliberately own them.

Cities have a perfect framework for the development of collective experiences.

The various manifestations of ephemeral art in our cities are the natural consequence of the evolution of a contemporary language that aims to manifest and reflect our behavior through artistic tools, its accessible medium, which is the public space.

To speak of performance art in the public space is to give an account of an ephemeral collective intervention, both the performers and those who observe make the action possible.  Performance art interventions in public space function as analyses, a type of living maps, inscribing the effects of collective action from a context where they are being performed and tracing specific points located in trajectories that can be explained as a reflective process.

Urban performance art provides a vision of the city, and its public space strengthens citizen participation.

Artists not only intervene in it, but they also substantially support social and affirming aesthetic changes.  The lack of connection of the citizens with their own neighborhoods translates into the loss of identity and collective memory, therefore, in the absence of common projects or shared interests. When the neighborhoods enter into conflict, the sense of community is lost and they begin to show indices of violence; proof of this is Ciudad Mural, a nickname that the neighborhood of Xanenetla received ten years ago in the city of Puebla de Los Ángeles; where we were summoned by the collective Tomate, a group of scenic and plastic artists to intervene with murals about the neighborhood stories. The technique of Spontaneous Theater at that time had the mission to reflect among the inhabitants the neighborhood problems and in conjunction with the creation of murals to capture on the facades the biographies of its people in an act to heal the social fabric.
Ephemeral art, therefore, provides culture, spectacle, space for reflection, and citizen participation as long as it manifests itself within certain conditions of respect for its environment and meeting minimum requirements for quality of execution.

Performance in times of pandemic.

Two years have passed since the global health devastation of the COVID-19 pandemic. Historically, we live in a watershed in all areas: social, economic, and cultural.  Two years on "stand by," and we returned with an extenuating factor: a vaccine that polarized public opinion and there were those who were fiercely glad to be safe by getting vaccinated and the denials with Machiavellian hypotheses that manifested themselves in different countries, to avoid vaccination.

The performance art intervention "Vaccination" was carried out in September 2021 and consisted of inviting passers-by to intervene into a dress made of masks that I wore with syringes full of color paints, I covered my head with a hat, and I wore masks and gloves.  In each of the actions I applied the precautionary measures that until that moment protected us from the virus, it was the ritual that all citizens adopted to inhabit the public space and make contact with others:  the participants were given hydro alcoholic gel when they took the syringe, the entire body was sprayed with sanitizer. This action was performed at different points from the corner of Motolinía and Madero Streets until reaching the Zócalo of Mexico City.  The production, video, and photographic recordings of this piece were in charge of "Dr. Fanatik. "

The stigma of the virus has made us relate differently in public spaces with the rest of the inhabitants.  Even our oral and body language changed: the greeting with a closed fist, or from elbow to elbow, far from the greeting with a kiss or hug, as well as protection rituals to enter anywhere: clean your shoes and take your temperature, accessories such as masks, gloves,  protective screen for the face, as well as the saturation of propaganda slogans such as "social distance," "stay at home," "you take care of yourself, we all take care of ourselves" among others. As a consequence, this situation led to the strengthening of an individualistic feeling typical of contemporary society based on the culture of immediacy and pressing consumerism.  We are in the middle of 2022 and cotidianamente the public space is reorganized in a social order that is made up of almost predictable behaviors, as soon as we knew that the public regulations yielded to less than 50%, we began to return to occupy the public spaces, we regrouped, and the self-reflective time of protection was gone. We came back stronger!  (It was another of the messages that they repeated to us until exhaustion) Of that, I am not very sure, what I am sure of is that there will be generational gaps, and it will be an arduous task for many to understand that we are social entities and as such, a percentage of our lives is built in the public space. 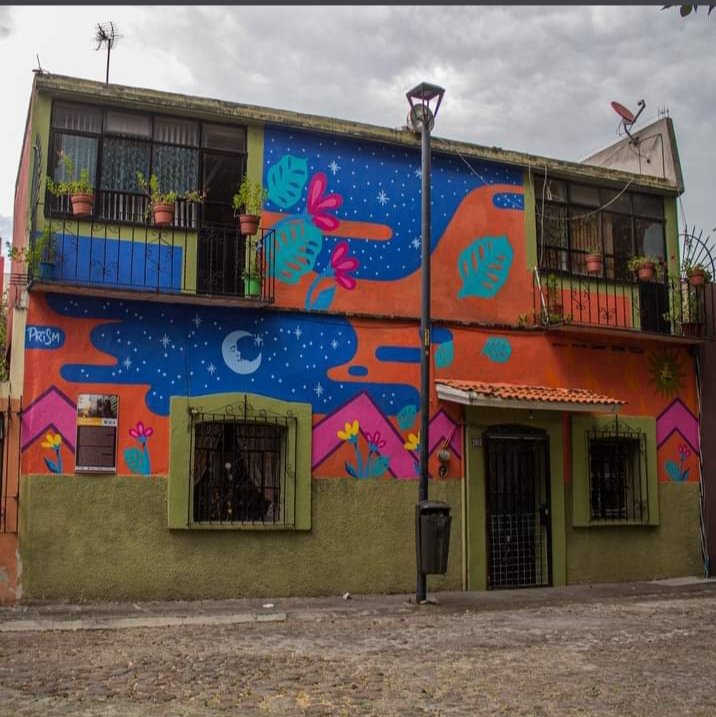 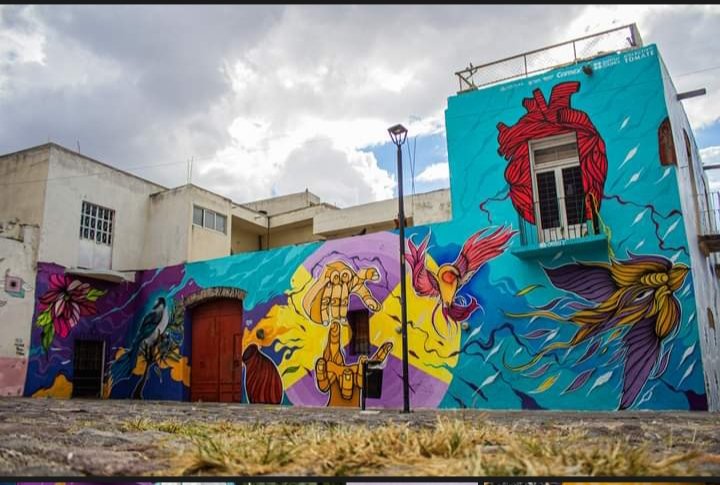 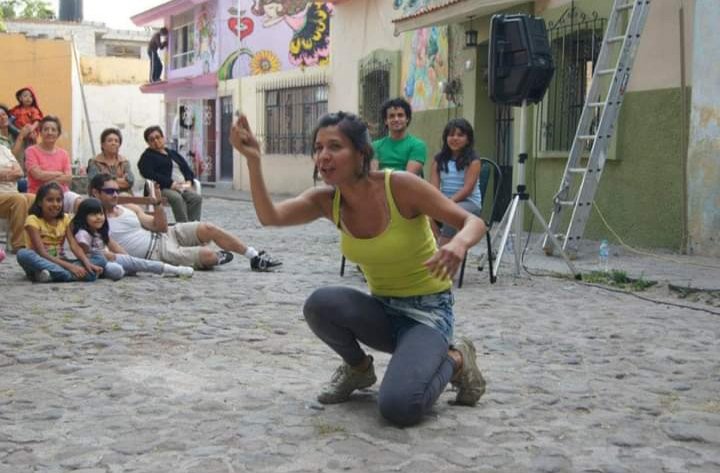 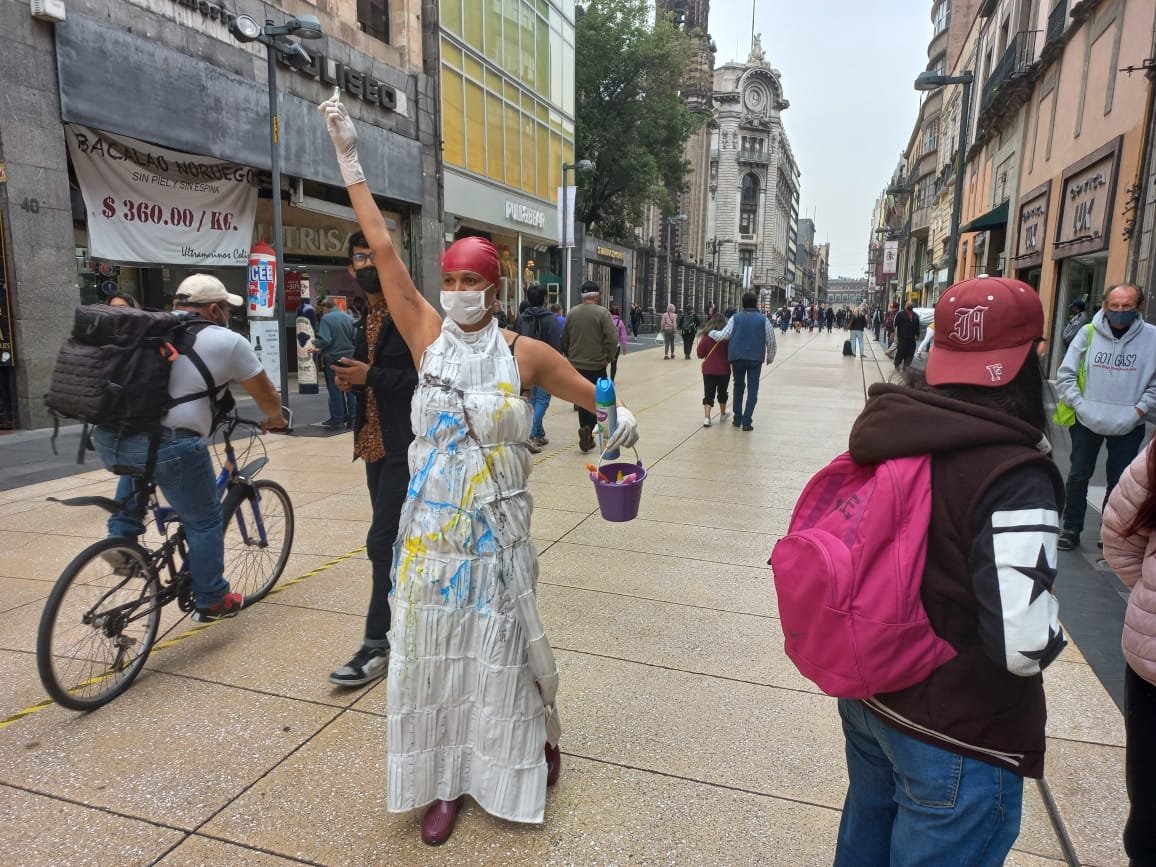 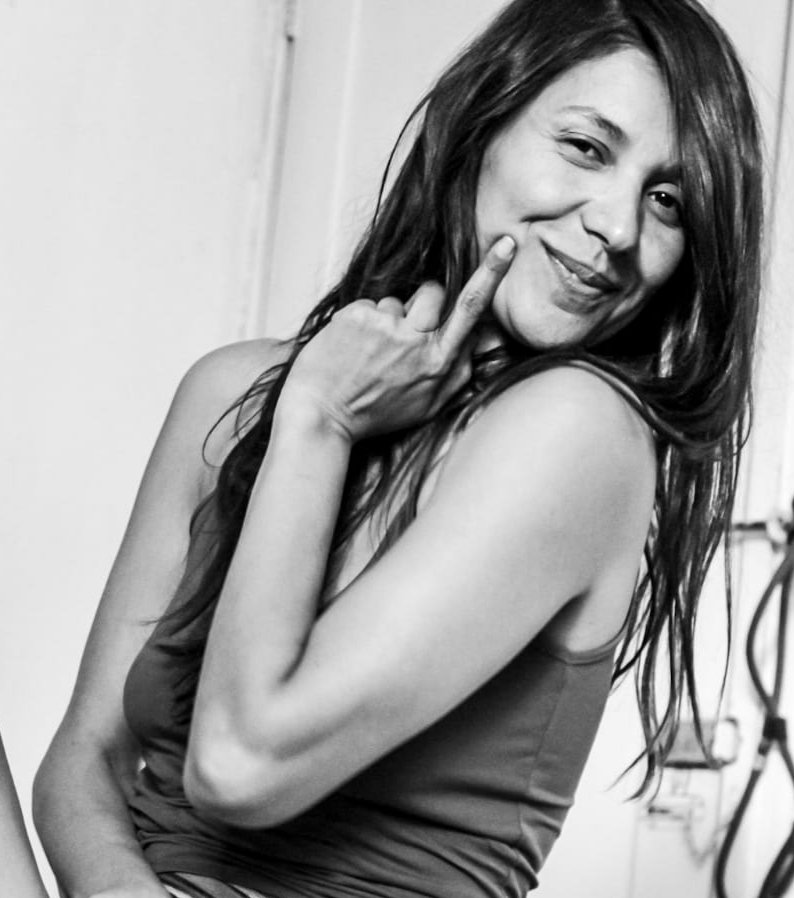 She is an actress from the School of Theater and Dramatic Literature of the College of Philosophy and Literature of the UNAM. As an oral narrator, she has performed on national stages such as the Children's and Youth Book Fair and internationally in countries such as Paris, Madrid, Dominican Republic. With the company of Teatros de Partcipación, she did performance acts based on spontaneous theater techniques, in Xanenetla Puebla, Zócalo in Mexico City. She has performed at the Museo Ex-Teresa de Arte Actual in Mexico City, the Museum of Mexico City, in the Cloister of Sor Juana, she participated in the performance "Open arms" by Eliu Almonte in the city of Madrid in 2019, and in 2021 she performed in the piece "Vaccination" downtown Mexico City. She has participated in the documentaries "Axis-Ater" and "Art from art" by Dr. Fanatik, the latter screened in 2022 at the Cineteca Nacional in Mexico City. She writes for the Mexican newspaper Libre en el Sur, and for AEDA, Asociación de Narración Oral de España. She has lived for the last 4 years.