Drawing in architecture has various functions and is used at different stages within the design process; it serves to think and reflect on the unbuilt, sketch and foresee, and project. The idea embodied, crystallized, externalized, and presented to the world is assimilated as a representation of reality, an interpretation of the material by the author. The drawing also carries in itself that plastic characteristic that moves and impacts, through color, nuances, and hasty spontaneous strokes, which reflect passion and thinking.

Drawing in architecture commonly evokes drawing the imagined, presenting the prefigured, joyful aesthetic gestures, ready for enjoyment, appreciation, and delight. It is common for drawing to be considered a natural ability, which not only develops but comes per se, as a kind of gift. It is common to believe that to be an architect is necessary to know how to draw, and preferably draw well. Currently, it is also common to believe the opposite, that you do not need to know how to draw to exercise or face the discipline of architecture.

On the other hand, drawing for other disciplines has different meanings and is mostly limited. For example, in medicine, in the notes on the anatomy of the human body of always, you can observe the graphic history of the approach to the real, how through the graphic documentation of the observed is that a material-natural object can be studied. Something similar happens in biology, with drawings of insects, animals, or plants. There are fascinating approaches, which try and manage to represent the characteristics of these natural objects with a precision of concordance of the real, with the represented. The care is justified by the fact that what is documented will be studied and investigated. The same thing happened or happens in the police field with people who drew spoken portraits, the challenge was to transform the word obtained from the description and contrast it with what was graphically interpreted by the draftsman.

With the above, another use of drawing in architecture is evident, in addition to that of creating, it is also about documenting, a very common practice in restoration or in the history of architecture. In the study of architecture, material objects, the built, the inhabited, and the uninhabited are drawn and documented.  For some cases, the fidelity of what is represented is crucial, for others, it is enough with the evocation of the memory, for example, in the travel notes absolute resemblance is not necessary, it is enough that whoever is drawing has the intention of drawing for himself or herself, discovers or rediscovers what he or she saw through his sketches and,  in this sense, the sketch becomes an individual and particular description of the observer that distances himself or herself from partial reality.

The act of drawing the existing demands the development of capacities other than those of drawing what does not yet exist, although they share features such as space or depth. To draw what is imagined, and what is believed, one can rely on technique, on the hand educated by the mind, on the watchful eye of the relationship between the assumption and the line. When concepts are drawn, one understands the construction of the draftsman, what he or she expresses what is an apple, the sky, a sphere, or a tree. The representation technique guides the one who draws not only so that he or she can articulate, but also to be able to communicate, sometimes, the one who draws only wants to say something without wanting to be understood.  Drawing what is thought, what is believed, and what is supposed to be reflected on, although it is expressed through the same code, has infinite freedom.

However, when drawing what exists, you not only say what you imagine, you say what you see and in doing so a different act begins. Although the interpretative fact is implicit, it does not reproduce a concept but a reality, an apple that exists, a sky, a sphere, a tree with individual features and characteristics, which are so for the one who draws but which are also for another spectator. At that moment what is seen by two or more, is captured by means of drawing.  This can be seen in landscape paintings, in Velázquez's painting of Las Meninas, in Rivera's murals, in cave paintings, or in the drawings of a cartoonist. There is then a channel of communication coinciding between the one who draws and the one who observes, where the analogy of concepts has as a judge in the material reality.

In this sense what is seen between two or more people, can be understood as the common, what is shared. Thus drawing is a connection between the draftsman and reality, but also between reality and the viewer through drawing.

Now, from reality, you can draw objects, animals, and people, you can draw all these together, consolidating it as a scene. In the nude drawing, generally what is drawn is the body of the model, and how it is affected by the environment, mainly with light, however, on paper only the model appears as floating in nothingness, not really, there is a background, a scene which is what the human inhabits and transforms, it can be natural or artificial.

Drawing the environment, the scenes of daily life relate the drawing with the observer since what he sees, is also what he inhabits, understanding by inhabiting in the words of Angela Giglia, "... the process by which the subject is placed in the center of space-time coordinates through its perception and relationship with the environment that surrounds it" (Giglia, 2012. Pp. 13) Being so in a drawing of the place, the viewer sees and sees himself inhabiting those space-time coordinates, he knows that it is there (place) and knows it was there (time). And it is here where a door opens to the past, impossible to be towards the future and the present because when drawing the environment in the present, really what is constantly being recorded in the past, so that the drawing of the environment has this historical characteristic, similar to that of a photograph, in it, the past is always recorded and when inhabiting all in a here and a now,  that past is shared, by place and time.

You can be inside or outside the buildings, assuming an exterior and an interior, the city can also be divided between the public and the private, the private is inhabited by a few, and the public we inhabit and we all share. So that makes a difference when drawing a public environment than a private one. When the city is drawn, a place and a time are recorded, which for those who inhabited it represents and means facts and experiences. When the city is drawn, not only objects are recorded, but representations of others, it is not only plastic, it is the representation of experiences, the chronicle through drawing, how through an interpreter the collective memory of all that we inhabit is reflected. When you see a travel postcard of a place that was visited, the memory comes to mind, the postcards capture images that everyone would like to remember.  By drawing the environment, the transformations of the places are historically documented. This act has repercussions on the territory of the social, the human, and the material, and leaves us in the gaze of the one who draws, the memory of the one who inhabits it. 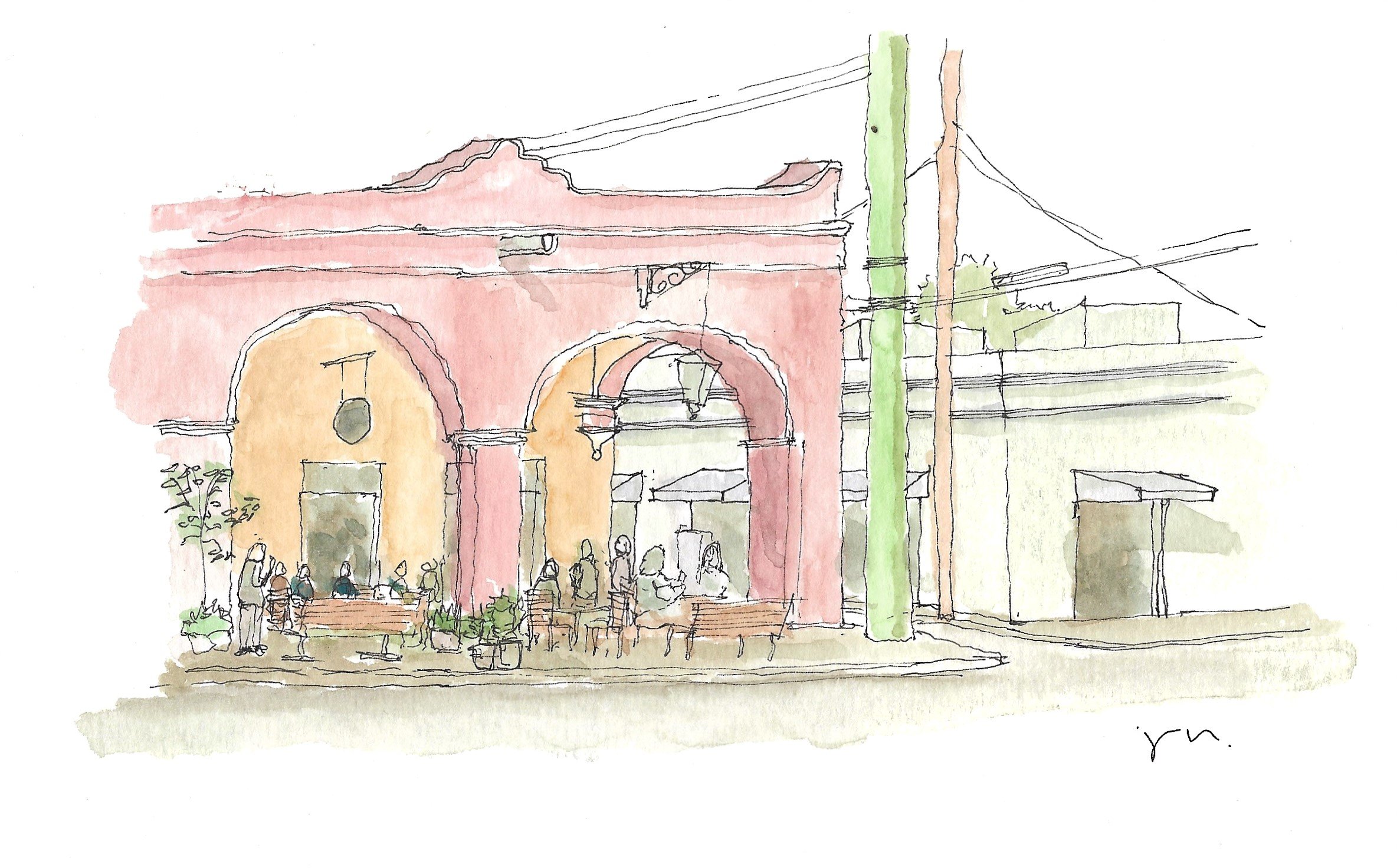 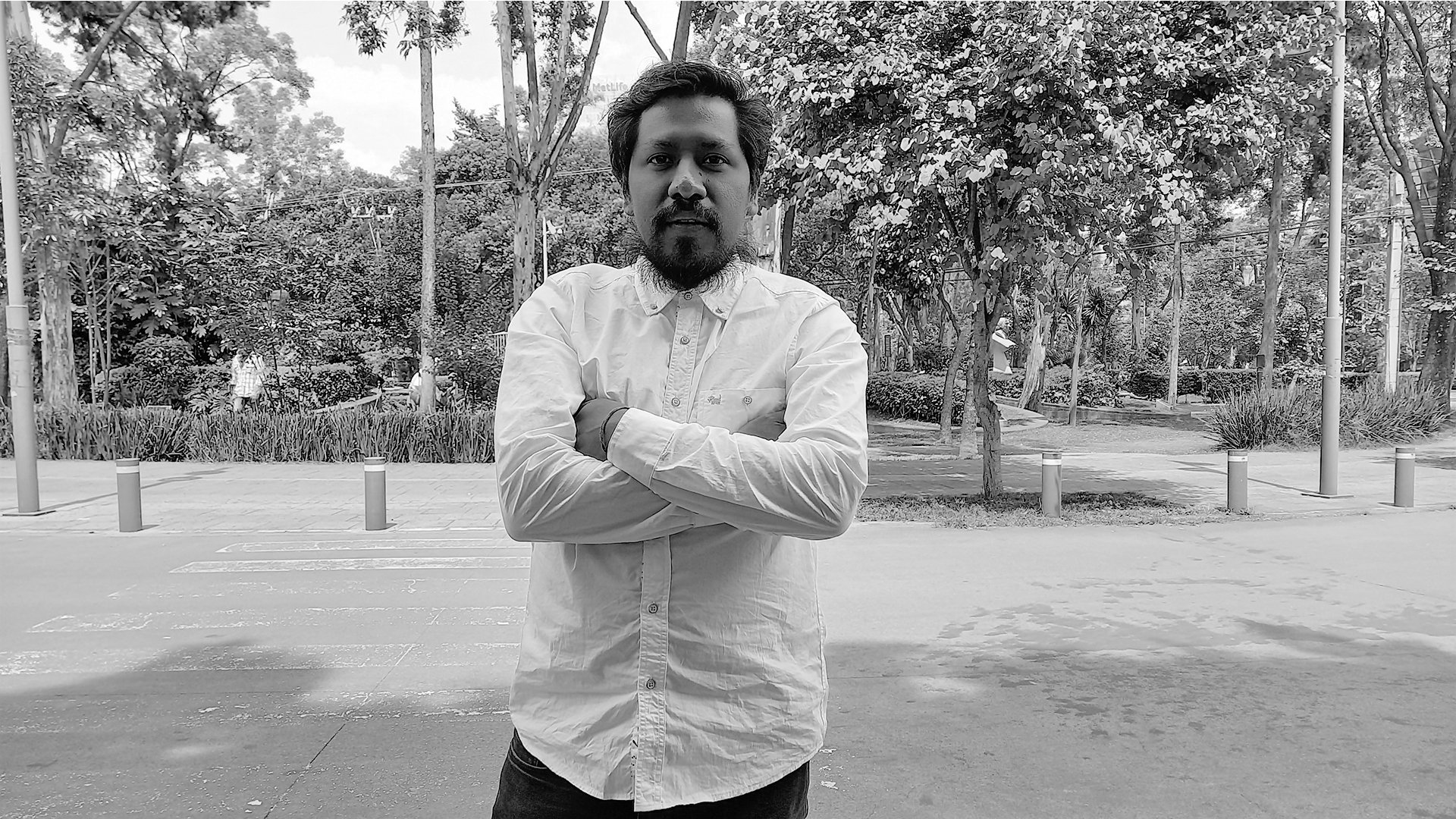 Graduated from the Universidad Autónoma Metropolitana Unidad Xochimilco, He focuses on the development of designs and architectural projects and construction supervision. I consider that drawing in the process of design of an architectural project, is a primary and essential basis to materialize a project, however, I think it is not only a base, but it is also a catalyst to think and imagine the unbuilt and that is why in 2014 I decided to start exercising that technique, drawing in SITE architectural scenes and everyday life. As I drew buildings, people in action, and stories, I realized it wasn't easy. Also there I understood that, unlike drawing in the calm and patience of a study, in place, everything is in a single shot, errors are part of the note, and spontaneity is characteristic, therefore, I occupy as the main technique the ink and watercolor. With this practice, I have managed to improve my perception and interpretation of matter and space, a situation that has been reflected as a design instrument in my work.

On the other hand, the intention of my work is to document what has been built, and important events in my life and perhaps in the lives of others. I have drawn events such as parades, plays, concerts, conferences, historical and contemporary buildings, temples, meetings in cafes, and living rooms.